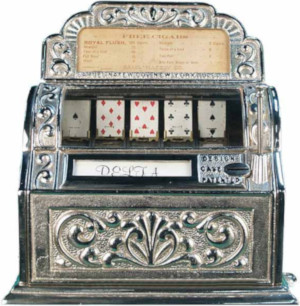 Slot Machines have been around for years, known as Fruit Machines in Great Britain and by many names around the globe. The game is started by inserting one or more coins/tokens into a slot and pulling a handle or pushing a button to activate any number of reels to spin. Typically on the reels, the symbols include stars, card suits, bars, numbers and various pictured fruits, such as cherries, plums, oranges and lemons. Once the reels have stopped rotating, the symbols will land and based on the combination, a prize will be awarded to the player, with each symbol combination being worth different values.

The very first Slot Machine was invented by Charles August Fey in 1884, then in the following year – he quit his job after a local saloon fell in love with the concept. In 1898, Fey built the Card Bell, which was the very first three-reel slot machine with automatic cash pay-outs. The machine had a handle that would set the reels in motion when it was pulled down and playing card suits which would form poker hands. In 1899, he created the Liberty Bell which used horseshoes and bells as well as player card suits on the reels, with three of the bells creating the highest paying combination.

In the early years of the 1900’s, Liberty Bell was increasingly growing in popularity and it wasn’t long before the idea was copied by Fey’s competitors. There was a setback in 1909, when San Francisco banned all slot machines from market. At this point there were over 3,300 slot machines in the city, but it was said the machines cannot pay out in cash and was suggested to offer drinks and cigars as rewards from the saloons stock.

The introduction of the symbols representing different fruit was introduced around the same time as the ban, as a cover up. All symbols on the reels were replaced with fruity symbols to represent chewing gum flavours with the impression that gum would be used as the reward for winning. However, this was just an illusion, as very few slot machines actually awarded chewing gum, but continued with cash prizes.

Slot machines remained popular during the 1920’s and continued on over the years, surviving underground and with the aid of organised criminals transporting the machines and private clubs allowing for players to get their fix. It wasn’t until after World War II when the machines were used worldwide, after governments were drawn by the prospect of tax revenue. In the 1950’s electromechanical slot machines were introduced, allowing for many new pay-out schemes, including x3 and x5 multipliers, where the size of the reward was defined by the amount of coins wagered.

Video Slot Machines which simulate reels on a monitor were introduced in Las Vegas in 1975. However, were originally not quite as popular as their predecessors, as players missed the satisfaction of cracking the handle, the sound of the reels falling into place and of course the stream of coins hitting the prize cup. In 1986, electronic systems were introduced, allowing for numerous slot machines in different locations to be interlinked, with a fraction of each wager was taken to create a shared “super jackpot,” which made up for the lack of other features for avid gamblers. Such Super Jackpots were able to reach extremely large values, with a prize of $40 million paid out in Las Vegas in 2003 to a lucky player.

In the early 21st century, casino operators were stuck with fear when online casinos threatened to take away the buzz from physical slot machines. The new age allowed for players to deposit money, make wagers and play a huge selection of games from the comfort of their own home on personal computers. Competition from online slots had been intermitted since the introduction of the Unlawful Internal Gambling Enforcement Act of 2006, which prohibited U.S. banks and financial institutions from carrying out business with online gambling companies.

Charles August Fey’s original slot machine pathed the way for a bright future of gambling. His very first creation set the benchmark for one of the most popular forms of gambling the world has ever seen, with a marketplace that is forever growing.

Become a Slots Guide Member and get our free monthly newsletter informing you of all the latest slots news and bonuses available from leading slots sites. Signup today and get exclusive offers available only to our members.